On March 27, 2018, Minister of Finance Tom Osborne tabled Newfoundland and Labrador’s 2018-19 budget. This budget sees the province’s Liberal government focusing on reducing expenditures as part of an overall approach to address the province’s economic, social and fiscal challenges. The government has indicated that these challenges need to be addressed in a balanced manner, without massive job reductions or cuts to services, to avoid a compounding effect on an already challenged economy.

The province plans to work towards fiscal balance over the next five years by reducing the government’s overall footprint, achieving operational efficiencies through the use of technology and shared services, and continuing to focus on expenditure control.

While the tax measures presented in this budget are minor, it does show that the government is taking positive steps towards reducing certain austere taxation measures that were implemented as part of the 2016 provincial budget to raise revenues during a challenging economic time. Furthermore, an independent review of the province’s taxation system is currently underway, with a final report of recommendations expected to be submitted by November 2018 for consideration in the province’s 2019 provincial
budget.

Through its efforts to reduce expenditures, the government of Newfoundland and Labrador is projecting a surplus by the 2022-23 fiscal year.

Fiscal results for the next five years are projected as follows:

These fiscal projections are based on key estimates that the price of oil will approximate $63 per barrel and the US to Canada exchange rate will approximate US $0.79 in both 2018-19 and 2019-20. Additionally, the projected deficits in 2017-18 and 2018-19 are impacted by the payment of severance expenses greed to under recent collective agreements with public sector employees.

Net debt as a percentage of the province’s GDP is expected to increase until 2020-21 and then begin to decrease. Furthermore, net borrowing for the duration of the government’s 2022-23 fiscal plan is now projected to increase by $1.4 billion, with $1.1 billion of this resulting from changes in cash flows relating to Nalcor Energy.

The province currently imposes a 2% payroll tax on employers whose annual remuneration exceeds a threshold of $1.2 million. The 2018 provincial budget increases this exemption threshold to $1.3 million effective January 1, 2019. Employers that have been subject to this tax will pay up to $2,000 less in tax starting in 2019.

A new Home Purchase Program has been introduced as part of the 2018 provincial budget that will provide taxpayers with $3,000 in grants to put towards the purchase of a newly constructed or never before purchased home costing under $400,000.

It has also been announced that the province is currently in the process of finalizing its approach to carbon pricing, making it among the last of the provinces to announce its carbon pricing plan. It is expected that once this plan becomes effective, the temporary gas tax that was introduced in 2016 will be phased out.
Further details surrounding the carbon pricing plan are expected to be released later in the spring of this year. 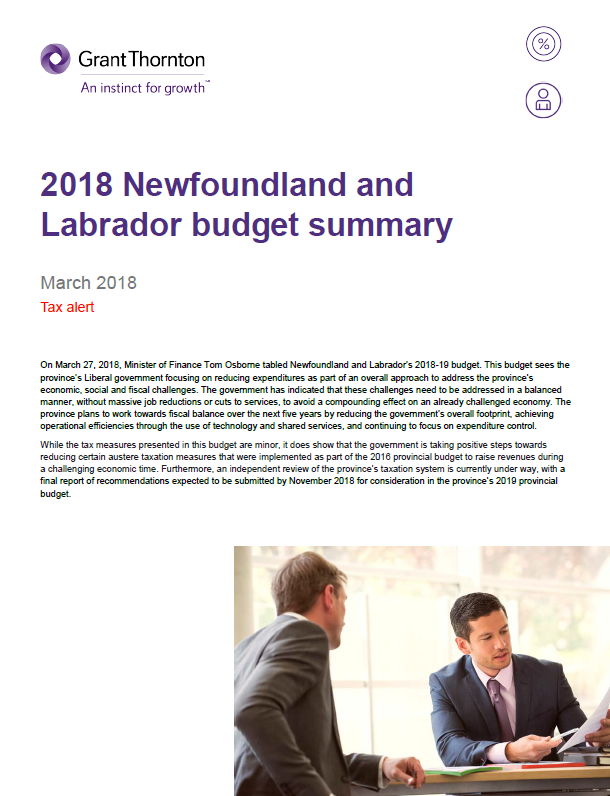