CRA updates its position on US LLLPs and LLPs

Previously, the CRA was of the view that such LLPs or LLLPs had to be treated as corporations both prospectively and retroactively. However, having considered the complexities and administrative issues arising from the transition from partnership filings to corporate filings, as would have been previously required by their earlier administrative announcement made in May 2016, the CRA—subject to the conditions outlined below— will allow LLPs and LLLPs to continue to be treated as a partnership for Canadian tax purposes. 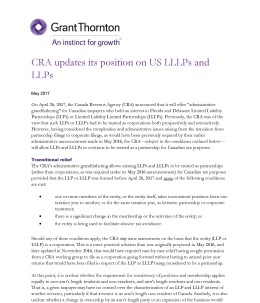