Held against the backdrop of a variant-fueled fourth wave of COVID-19, an affordable housing crisis, growing climate concerns and continued economic uncertainty, Canadians went to the polls and re-elected a Liberal minority federal government on September 20 after a snap election.

Under its renewed mandate, there are lingering questions about how much the Liberal government will be able to accomplish while in power for another term; and what measures they’ll enact to put Canada on the road to economic recovery. While a minority government was the most likely outcome, it’s now up to the Liberal party to maintain the country’s confidence.

Here is a summary of the results and what it could mean for business owners:

The following summary is up-to-date as of 12:00 p.m. EST on September 21; it’s subject to change as mail-in ballots are counted

All the federal party leaders were elected or re-elected in their ridings, except for Green Party leader Annamie Paul.

After a 36-day campaign, it’s evident that little has changed in voters’ preferences. Each of the political parties focused their platforms on pandemic response and competing visions for economic recovery. They had different ideas for how much should be spent, where it should be spent and the duration of spending.

Prior to the election, Grant Thornton released a summary of the major party platforms [ 24227 kb ] with a focus on tax and business-related factors. With the results now in, we’ve conducted a deeper analysis of how the proposed tax measures may impact Canadians—and the country’s road to economic recovery.

The Liberals have already spent billions of dollars on pandemic aid in the form of relief benefits and wage subsidies and have announced further plans to extend the Canada Emergency Wage Subsidy (CEWS) to October. Additionally, they’ve proposed an extension of the Canada Recovery Hiring Program (CRHP) until March to help small employers make new hires. The CHRP would pay 50% of the wages of new employees until October, with the rate decreasing to 20% from November to March 2022. These programs could give small business owners more time to recover and rehire in the next year.

The party has also pledged to boost the Canada Small Business Financing Program (CSBFP) to increase the maximum loan amount to $500K from $350K. Further, the Liberals intend to help the hard-hit tourism industry with temporary wage and rent support for up to 75% of expenses, as well as introduce the Arts and Culture Recovery Program which will match ticket sales to compensate for reduced capacity in event venues.

The increase to the CSBFP could provide significant capital for expansion for small businesses who qualify (e.g. those with annual gross revenue under $10 million and that meet other qualifying criteria). Access to capital through the CSBFP, as well as the continued availability of the CRHP, could also provide small businesses with a significant opportunity to expand operations as they continue their recovery from the economic downturn caused by the pandemic.

Targeting Bay Street as a source of new revenue

The Liberals have proposed an increase to the federal general corporate income tax rate for financial institutions earning more than $1 billion annually, with a rise from 15% to 18%. Still focusing on financial institutions, the Liberals also plan to introduce the Canada Recovery Dividend—a temporary tax payable by banks and insurance companies with earnings over $1 billion over the next four years. Little more is currently known about this proposed measure, including what rate would apply and on what earnings it would apply to. Nevertheless, given banks’ significant jump in earnings in their most recent fiscal quarter, year-over-year, as well as the government’s significant spending over the last 18 months, it’s likely that these measures would stick.

To address potential sophisticated tax planning or profit-shifting by large banks and insurance companies, the Liberals also intend to develop targeted anti-avoidance rules. Though it’s unclear what such measures would look like, these measures are expected to take effect in 2022-23.

In addition, the Liberals intend to implement a global minimum tax requiring a parent company to pay a “top-up” if income made further down the ownership chain has been taxed below the global minimum rate, which is currently set at 15%.

With climate top of mind for many Canadians this election, the Liberals plan to introduce corporate tax measures that are tied to environmental concerns. One of the proposed measures is a new investment tax credit of up to 30% on “clean technologies”. They also stated they would double the Mineral Exploration Tax Credit on minerals that are essential for the manufacturing of clean technologies, such as batteries. Finally, with an eye on consumers, the Liberals have stated they will extend the rebate for zero-emission vehicles (iZEV rebate worth up to $5K) to a wider range of vehicle types, including used vehicles.

For small-to-medium enterprises (SMEs) that are considering expansion and are planning to make capital purchases in the near future, it’s possible that the “clean technology ITC” could prove beneficial. Although few details are currently available, SMEs with intentions of making what might be considered “clean technology” capital purchases should keep a close eye on what expenditures might qualify for this ITC, once more details on this measure are released.

Taxation on high-income earners and addressing the affordable housing crisis

The Liberals plan to impose a 15% minimum tax rule for top bracket taxpayers, limiting their ability to reduce their tax liability with “excessive deductions and credits”. The highest income tax bracket for federal taxes is currently set on income over $216,511. It should be noted that a minimum tax rule, known as the Alternative Minimum Tax, already exists with the same aim as the one noted here so we’ll need to wait to see how this new 15% minimum tax rule will be implemented.

In what appears to be an effort to go after wealthier individuals, the party intends to introduce a luxury tax on new cars and private aircrafts worth more than $100K. This measure was already in the works at the time the election was called, with an intended application date of January 1, 2022. The inclusion in the party platform simply confirms the Liberal party’s intention of proceeding with this tax.

With affordable housing being a major driver for this election, the Liberals have proposed a new tax-free First Home Savings Account to help younger Canadians afford a down payment faster. Additionally, the party has promised to double the first-time Home Buyers’ Credit and offer a new multi-generational home renovation tax credit to help families add a secondary unit to their home for immediate or extended family members. They have also promised new tax credits to cover home appliance repairs (up to $500) and double the Home Accessibility Tax Credit (to $20K on renovation expenses).

To tackle foreign investment and flipping in the housing sector, the Liberals plan to expand the upcoming 1% tax on foreign-owned vacant housing to include foreign-owner vacant land within large urban areas and impose an anti-flipping tax, requiring residential properties to be held for at least 12 months, with exemptions for major life events.

The Liberals have proposed targeted new credits for certain workers, such as a new Labour Mobility Tax Credit of up to $600/year for workers in the building and construction trades for travel and temporary relocation expenses; they have also proposed a one-time tax deduction for health care professionals of up to $15K over their first three years of practice; and, they plan to offer a Career Extension Tax Credit of up to $1,650 for seniors continuing to work past 65 and who earn a minimum of $5K.

Although these measures are targeted towards individuals, there are potential implications for employers. The Labour Mobility Tax Credit may make this type of work more attractive to workers as they’ll be able to experience tax savings. New health care professionals who experience savings from a $15K deduction could potentially use those savings to reinvest in their practice through expansion and new hiring. Although the tax credit for seniors may not be significant, it may be enough motivation to encourage seniors who are not quite sure about retirement to remain in the workforce, thus providing employers with a larger overall pool of workers to hire from.

Are we on the road to economic recovery?

Canada’s tax system is a major policy lever for rebuilding the Canadian economy. While the Liberals have proposed measures to continue to support individuals and businesses through the COVID-19 pandemic, we would like to get more clarity around spending measures and how they’re being balanced with tax revenue collection in order to ensure that there is a plan in place to pay down the deficits that were created during the pandemic. We’d also like some assurance that our economic recovery isn’t derailed by significant government deficits and no plan to pay back over a realistic time frame.

Read our analysis on what the re-elected Liberal minority federal government could mean for business owners. 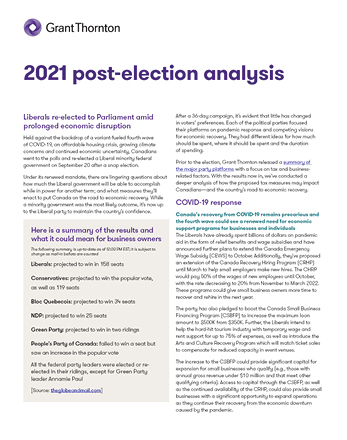 Have questions? Let us help.

The newly proposed tax measures could offer opportunities for taxpayers—as well as risks for businesses, individuals and consumers.

At Grant Thornton, our deep technical expertise and broad perspective on complex tax matters help us to understand your challenges and identify opportunities—especially in these extraordinary times. Contact us today to learn how these changes may affect you.