On April 10, 2018, Minister of Finance Donna Harpauer tabled Saskatchewan’s 2018-19 budget. This budget sees the province focusing on fiscal responsibility to achieve its target of balancing the budget by 2019. Spending is being controlled through a focus on the province’s compensation costs, the largest single governmental budgetary expense, as well as through the creation of a single Saskatchewan Authority.

While reducing expenditures is paramount, notable investments in health care, social services and agriculture have also been included in this budget. A record breaking $5.77 billion is being allocated to health care spending; social services and assistance spending is being increased by $25 million to a record $1.38 billion; and $378 million is being invested in the agriculture sector, including record investment in agricultural research with more than $258 million to fully fund business-risk management programs such as Crop Insurance, AgriStability, AgriInvest and Western Livestock Price Insurance.

One notable absence in this budget is Saskatchewan’s carbon tax plan and the province’s government remains committed to opposing this tax.

Saskatchewan’s new premier ran on a platform of balancing the province’s budget by 2019. The estimates provided in the 2018 budget show that the government is on track to achieve this goal, with a $6 million surplus being projected for the 2019-20 fiscal year. Fiscal results for the next four years are projected as follows:

The province was able to reduce its deficit in part through a large savings in pension liability and reduced expense for the Teachers' Superannuation Plan as a result of higher interest rates and other changes in actuarial assumptions. 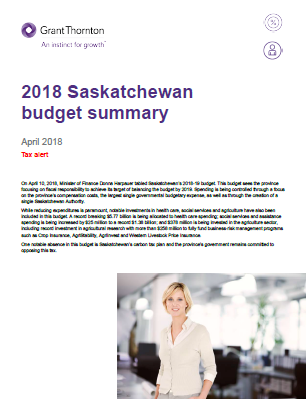