On March 22, 2018, Finance Minister Joe Ceci tabled Alberta’s 2018-19 budget. This budget sees the province emerging from a time of economic recession with a focus on diversifying its resource-based economy to one that is resilient, stable and less vulnerable to future changes in the price of oil.

To accomplish its goals, the province’s NDP government has outlined three main areas of focus: diversifying the economy, protecting vital public services and returning the province to fiscal balance. It has been announced that the province will focus on controlling spending, eliminating waste and finding efficiencies in order to balance the budget by 2023, and then begin to focus on reducing the net debt levels.

The government has outlined in this budget its plan to achieve fiscal balance by gradually reducing the deficit over the next six years and is projecting a surplus by the 2023-24 fiscal year.

It is worth noting that these projections rely on increased personal and corporate taxation revenues that account for 31.4% of total revenues in 2017-18 and 34.1% of total revenues in 2020-21. This increase represents growth; however, this growth is reliant on the economic performance of the province, which remains reliant on the performance of the oil and gas sector.
Furthermore, these projections are based on the assumption that the Enbridge Line 3 replacement pipeline will commence operations in 2019 and the TransCanada Keystone XL and Kinder Morgan TransMountain Expansion pipelines will commence operations by 2021.

While the deficit is projected to decrease, the province’s net debt levels are expected to increase substantially over the next few years, from $20.3 billion forecasted for the 2017-18 fiscal year to $56 billion projected for the 2023-24 fiscal year.

An additional 5% diversity and inclusion credit enhancement may also be available where the eligible corporation employs workers from under-represented groups. Further detail regarding this enhancement will be provided when the regulations are brought forward.

This program will provide a maximum funding of $20 million per year and additional details relating to the application and eligibility requirements will be available by summer 2018.

The 2018 provincial budget notes that Alberta has agreed in principle to enter into a coordinated framework with the federal government regarding the taxation of cannabis, covering the first two years of legalization. Under this framework, the greater of $1 per gram or 10% of the producer price will be collected, with the province receiving 75% of this tax room. The province will also be allowed to collect an additional tax of up to 10% of the retail price. 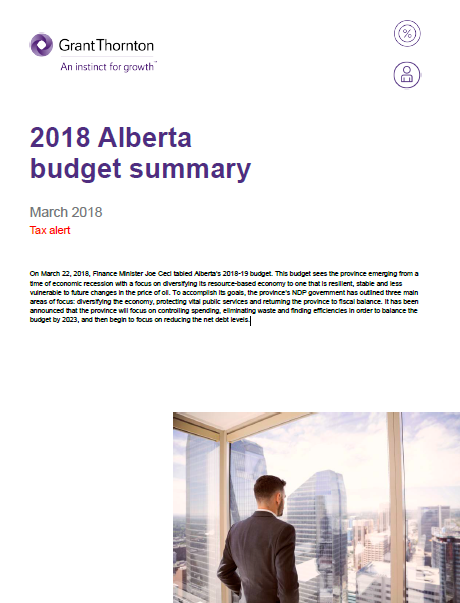