February 20, 2018, Finance Minister Carole James tabled British Columbia’s 2018–19 budget. This is the first full budget presented by the province’s new government; it outlines an overall plan to increase affordability for residents of BC, with a primary focus on the need for affordable housing solutions and the demand for more affordable, available childcare.

Building on the legacy that was set by the previous government, the government has delivered the province’s sixth balanced budget in a row, and continues to project surpluses over the next three years.

Debt levels, however, are expected to increase and are projected to reach $77 billion by the end of 2020–21.

The film incentive BC tax credit is expanded to include scriptwriting expenditures on BC labour incurred by a corporation prior to the completion of the final script stage of the production for expenditures incurred on or after February 21, 2018.

No changes to personal income tax rates are proposed. The rates for 2018 are as follows: 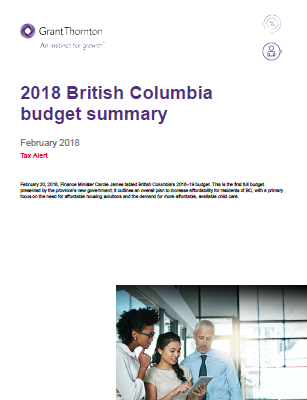