What tax measures can we expect in the 2018 federal budget?

With the federal government's 2018 budget expected to be released early next week—on Tuesday February 27, 2018—there is plenty of speculation surrounding what we may expect to see in it. The government has already indicated that this budget will include further details related to its July 18, 2017 proposals outlined in its consultation paper, Tax Planning Using Private Corporations. More specifically, the government indicated that the new passive income rules, as well as the final legislation for income sprinkling will be included in this budget.

Based on its pre-budget consultations, the government will also likely include investments in scientific research. One question that many are wondering is whether the budget will contain measures in response to the US tax reform.

Income sprinkling involves shifting income that would typically be realized by an individual subject to higher tax rates, to family members subject to lower personal tax rates—or who do not earn taxable income at all.

To address income sprinkling, the government released draft legislation with the July 18, 2017 consultation paper. However, concerns were raised that these proposed measures were circular, too complex and broad, and resulted in unintended consequences to taxpayers. Therefore, on December 13, 2017, the government released revised draft legislation which was intended to better target the income to be captured and simplify the application of the rules by including bright line tests.

The government also stated that these measures will be legislated as part of the 2018 budget process. It is not clear, however, whether the government intends to introduce additional changes or provide further clarity on the application of these proposed rules

In addition to income sprinkling, the government also noted, in the July 18, 2017 consultation paper, its intention to address the perceived tax advantages that can be obtained through holding passive investments in a private corporation, as opposed to personally.

Income earned inside a corporation is subject to lower tax rates compared to income earned personally; therefore, when a corporate owner uses earnings taxed at the lower corporate tax rates to fund passive investments held within the corporation, this can result in an advantage because the amount of after-tax income that can be invested passively within the corporation would be larger than if the after-tax income was earned personally. As a result, the government stated that it will be designing new rules to limit this tax deferral advantage.

The details of the passive income rules are expected to be released in the 2018 budget, including a technical description of how the passive investment income threshold will be applied. 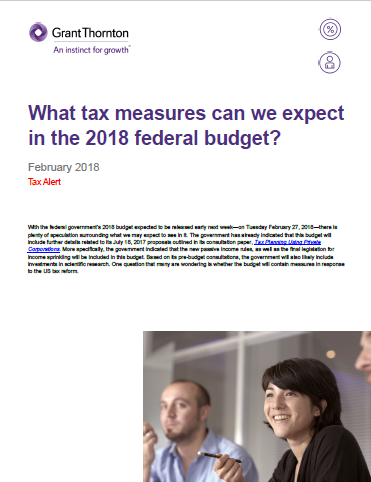