Did you know that you may save taxes if you donate publicly traded securities directly to a registered charity? This is a smart and tax-effective alternative to donating cash—but how you structure the charitable donations can be as important as the amount given.

However, there is an exception to this rule where eligible property is donated to a qualified donee such as a registered charity. Eligible property generally includes securities, such as shares and bonds, that are listed on a designated stock exchange as well as mutual fund units. For such donations, the taxable portion of the gain is reduced from 50 per cent to nil so that the disposition of the security to the charity is fully exempt from capital gains tax.

You must donate the security directly to the charitable organization to receive this favorable tax treatment. You can’t sell the security in the open market and donate the cash. If you do, you will be subject to tax on any resulting capital gain. By donating the shares directly, the charity benefits by receiving the full value of the shares. At the same time, you benefit by paying no tax on the disposition and receiving a charitable donation receipt for the fair market value of the shares at the time of the donation. This can result in a significant tax benefit for anyone with charitable intent.

For 2022, the federal donation tax credit is 15 per cent on the first $200 of donations claimed in the year, and 29 per cent on donations above $200. If your taxable income exceeds the top personal tax bracket ($221,708 in 2022), the federal donation tax credit rate can reach 33 per cent for donations over $200. After factoring in provincial tax savings (except for Québec), donations in excess of $200 will save you anywhere from 44.2 to 54 per cent, depending on your resident province.

The donation tax credit is non-refundable and the amount of eligible donations that can be claimed is limited to 75 per cent of net income (increased to 100 per cent of net income in the year of death or the year preceding death). However, unused donations can be carried forward 5 years. Also, a spouse or common-law partner may be able to claim the donation instead of the individual making the donation, which, depending on the situation, could result in a higher benefit.

An example of the potential tax benefit is illustrated in the table below (assuming the donor is taxed at a top marginal rate of 50 per cent and a donation receives a combined federal and provincial tax credit of 50 per cent):

In this example, the individual saves $1,000 in tax if the securities are donated directly to a registered charity as opposed to making a cash donation of the same value as the shares.

Donating through a corporation

There are many factors to consider when making a charitable donation, whether as an individual or through your corporation, and the potential tax benefits will vary based on your situation. Before making a sizeable donation—whether in cash or in kind—please contact your local Grant Thornton LLP advisor or contact us here.

The information contained herein is general in nature and is based on proposals that are subject to change. It is not, and should not be construed as, accounting, legal or tax advice or an opinion provided by Grant Thornton LLP to the reader. This material may not be applicable to, or suitable for, specific circumstances or needs and may require consideration of other factors not described herein. 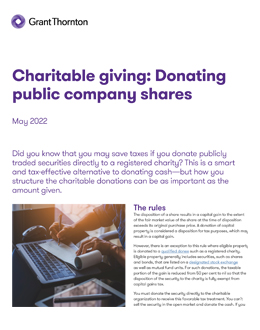