The 2014 federal budget introduced measures that will significantly impact the taxation of trusts created upon the death of an individual. Some of these proposed changes, effective as of the 2016 taxation year, were addressed in our June 2014 Wealth preservation update, in the article, “Is testamentary trust planning still ‘alive?’”. Since that time, draft legislation released in late August revealed some surprise measures that were not included in the original federal budget announcement.

These new proposed measures, also effective as of the 2016 taxation year, may have a significant impact on common estate planning strategies, particularly those involving spousal and other life interest trusts. The proposed rules have raised concerns regarding potential double taxation issues where the trust holds private company shares or other assets with a significant unrealized gain.

Find out more about the changes to testamentary trust rules. [ 147 kb ] 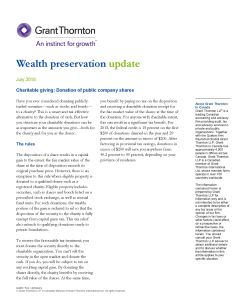