Alberta’s 2015-16 budget was tabled on March 26, 2015. Since this budget was not passed into law before the NDP won the election on May 5, 2015, the provincial government will not be going ahead with any of the tax measures announced in this budget. These proposals were summarized in our client release titled 2015 Alberta budget summary.

On June 18, 2015, Alberta Finance Minister Joe Ceci tabled Bill 2. Since Alberta has a majority government, this Bill is considered to be substantively enacted for financial reporting purposes. This Bill introduced both personal and corporate income tax increases. Alberta is expected to release its next budget sometime this fall. 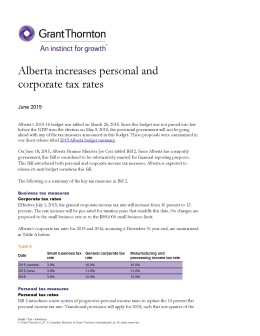