This summary outlines the various new measures for employers and employees in the agriculture, agri-food, aquaculture, and fisheries industries. These government programs are in addition to the federal measures announced for all eligible businesses across various industries such as CEWS, CEBA, CECRA and BCAP.

Changes to the Canada Emergency Business Account (CEBA) announced on May 11, 2020, are expected to increase the accessibility to farmers. The program was originally announced in April as a means to provide small businesses with a quick cash infusion of $40,000 in the form of a loan, 25% of which is forgivable if repaid by December 31, 2022. Since it was originally introduced, there have been changes to expand its availability to include more businesses. For example, when originally announced, an employer was required to have payroll between $50,000 and $1 million, but this was later expanded to payroll between $20,000 and $1.5 million.

The program has expanded to include sole proprietors, businesses that rely on contractors and eligible family-owned corporations. Furthermore, businesses with payroll lower than $20,000 are also now eligible to apply, provided they meet the following criteria: 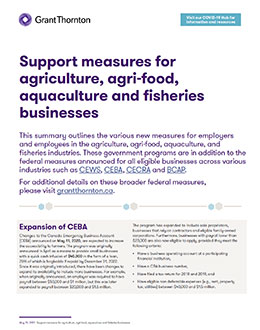