On December 9, 2019, Minister of Finance Bill Morneau and newly-appointed Minister of Middle Class Prosperity Mona Fortier held a joint press conference to announce a tax cut for the middle class.

The tax cut announced on Monday morning is almost identical to the one included in the Liberal party’s election platform. It will begin in 2020 and will result in an increase to the basic personal amount (BPA) beyond the standard increase, which is currently indexed to inflation. This increase would apply to the basic personal tax credit for all Canadian resident individuals, as well as to the married or common-law credit (for those claiming a spouse or common-law partner as a dependent) and the eligible dependent credit (for those claiming someone other than a spouse or commonlaw partner as a dependent living with them). 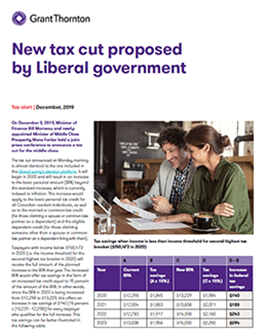