The Speech from the Throne: Canada’s government sets its direction for the future

With the Liberal minority government in power and ready to govern, Governor General Julie Payette delivered the Speech from the Throne to the Senate of Canada on December 5, 2019 to open Canada’s 43rd Parliament. In front of Prime Minister Justin Trudeau, elected Members of Parliament, senators, Supreme Court justices and other VIPs, the Governor General read aloud, in both official languages, the Liberal government’s plan for all Canadians. The Throne Speech appeared to outline the federal government’s intent to work on policies more closely aligned with its own ideological views and to continue working on policies from its first mandate. However, the government also seemed to purposefully reach out to all Parliamentarians, regardless of political party, to work together to get things done.

Tax relief was one of the major items on the government’s agenda in the Throne Speech. To find out all the details: 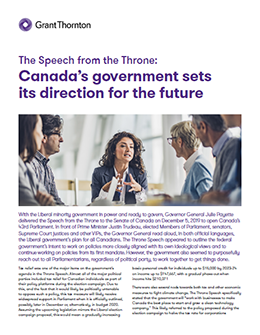