As a result of the change in government on May 2017, Finance Minister Carole James presented a budget update on September 11, 2017. The update addresses the new government’s key commitment to improving affordability, enhancing critical services and building a strong, sustainable, and innovative economy that creates jobs and works for everyone.

The government continues to project surpluses over the next three fiscal years and revenues are forecasted to be $4.6 billion higher than the estimates used in preparing the original 2017-2018 budget issued in February 2017. BC’s real GDP growth has also exceeded the government’s expectations based on the strength of key indicators such as employment, retail sales, housing starts and exports. 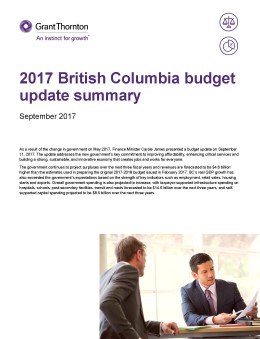