The federal government announced a number of changes in response to the public backlash received since they released their tax proposals affecting private companies on July 18, 2017.

The government received over 21,000 submissions during the 75-day consultation period which ended on October 2, 2017—Grant Thornton participated in this process, you can read our submission to the Department of Finance here. [ 2278 kb ]

Based on the responses received from Canadians across the country, the government stated that it will outline a new approach to better target the relatively small number of high-income individuals who it believes receive the biggest advantage from the existing tax rules.

The government also announced that it will not be moving forward with measures that would limit access to the Lifetime Capital Gains Exemption (LCGE); however, it will proceed with the proposed measures related to income sprinkling. That said, it intends to simplify them with the aim of providing greater certainty for family members that contribute to a family business, including a family farm. The government also stated that it intends to proceed with the measures to limit the deferral opportunities related to passive investments.

For more information on these prior announcements, please refer to our release here [ 2278 kb ]. 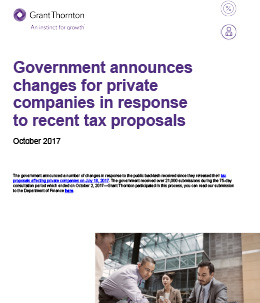