Income splitting rules are changing – are you ready?

Unfortunately for Canada’s private business sector, perception is everything. The perception at hand, held by Canada’s current government, is that “tax planning strategies involving corporations are being used to gain unfair tax advantages.” As a result, major changes are coming to the Income Tax Act to put a stop to it.

While purportedly cracking down on “wealthy” Canadians that are trying to “avoid” paying their fair share through the use of “loopholes” is laudable, the result of these proposed changes is in reality a hit on the entrepreneurial middle class of the Canadian economy. Some of the changes may be unduly onerous—even unfair in some cases – and represent significant policy revision to the underlying theory embedded in the Canadian tax system that has existed for decades. Although the proposed changes will have an impact on truly wealthy Canadians, the impact will be far greater on middle class business owners.

Income splitting is one tax strategy that private business owners have long used to manage their overall family tax position. In one common scenario, a corporation will pay dividends to family members who own shares in the company, which may be taxed at a lower marginal rate.

Tax savings will be capped at a maximum of $2,000 per year per family and will be provided as a non-refundable tax credit. This measure (with the exception of the $2,000 cap) was first announced in 2011, and its implementation was made contingent on the government first balancing the budget.

The proposed measure, the so-called Family Tax Cut, will only benefit those couples with minor children where there is either one income-earner or where there are two income-earners where one spouse or common-law partner is subject to a lower marginal rate of tax than the other.

For example, assume Dave earns an income of $200,000 per year and is, therefore, subject to the highest marginal federal rate of tax, at 29%. His wife, Marsha, earns income totalling $45,000 and is subject to a much lower federal marginal tax rate. Dave can transfer $50,000 of' his income to Marsha so that it will be notionally taxed in Marsha’s hands at a lower rate.

Although the actual reduction in the overall combined tax liability for the couple, in this case, would normally be more than $2,0002 the tax savings allowed would be capped at $2,000, as a non-refundable tax credit. The credit will be able to be claimed by either person, but not both. 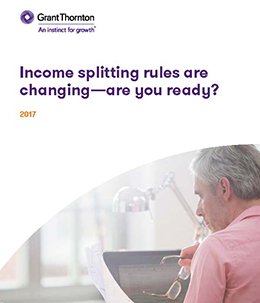