Thanks largely to the $2.5 billion in revenue resulting from the newly-signed Atlantic Accord agreement1, Budget 2019 projects a surplus of $1.9 billion in the 2019-20 fiscal year. The Atlantic Accord revenue is a one-time accounting adjustment in the 2019-20 fiscal year, but the payments will be made over the next 38 years—with the first installment occurring in 2019 at $134.9 million.

In addition to the Atlantic Accord accounting adjustment, the recent announcement also projects a balanced budget by 2022-23—and revises the 2018-19 deficit to $522 million, down from the original Budget 2018 forecast of $683 million.

Fiscal results for the next four years are projected as follows:

It should be noted that the government already announced that a provincial election will occur before the end of the school year in late June. As such, it is uncertain whether this budget will pass in the legislature before that date.

There are no changes proposed to the corporate tax rates or the $500,000 small business limit.

Newfoundland and Labrador’s corporate tax rates for 2019 are summarized as follows:

No changes to personal income tax rates are proposed in Budget 2019. The relevant rates for 2019 are as follows:

The following table illustrates the top combined federal-Newfoundland and Labrador marginal rate of tax on various types of income for 2019. 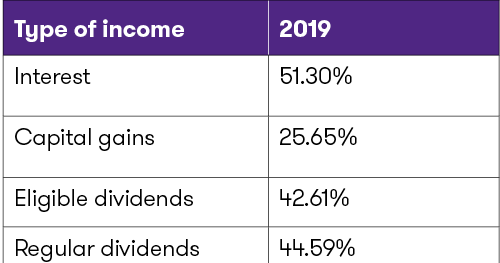