Created in response to COVID-19, the Canada Emergency Wage Subsidy (CEWS or subsidy) provides savings to employers through a subsidy equal to 75% of employee wages on the first $58,700 per employee, up to a maximum of $847 per week, with no overall maximum for the employer.

Who is eligible for the CEWS?

The CEWS will be available to employers that meet the definition of an “eligible entity”:

The term “Public institution” is also defined and would include municipalities, local governments, Crown corporations (both federal and provincial), public universities or colleges, schools, school boards, hospitals and health authorities, among others.

How does an eligible entity qualify for the CEWS?

When the CEWS was first introduced, it required a decrease in monthly revenues of 30% as compared to the same month in the previous year for March, April and May. Since then, the government has made key changes to this requirement. Depending on the choices made by the employer with respect to revenues, it could impact their ability to qualify for the subsidy. Considerations need to be made in the following areas:

Some of these items are discussed in this section, and the rest
in the section thereafter.

[1] It should be noted that legislation including these types of Indigenous businesses has not yet been released by the Department of Finance to confirm this position. Any Indigenous business that may be relying on this announcement should proceed with caution until Finance has provided confirmation.

Grant Thornton LLP wants to caution that these rules are still new and continue to evolve as the government continues to re-evaluate the economic impact caused by the COVID-19 pandemic. We may still see changes to these measures—as well as new measures—as the government attempts to address the issues that have been raised by us and the tax community. Therefore, any analysis included herein, reflects our knowledge as of the date and time of this email and may no longer be applicable if changes do occur and you should proceed with caution before making any decisions. 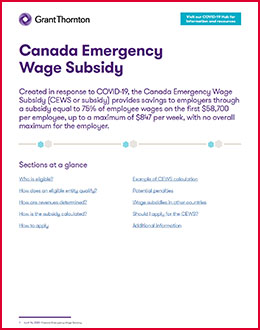 The Canada Emergency Business Account (CEBA) was created by the federal government to provide interest-free loans of up to $40,000 for small businesses and not-for-profit organizations.

In response to COVID-19, a new program called the Canada Emergency Response Benefit (CERB) was established to provide $2,000 per month (i.e., $500 per week) to workers who qualify for the benefit for up to 16 weeks.