Chrystia Freeland, Deputy Prime Minister and Finance Minister, presented the Economic and Fiscal Update 2021—typically known as the Fall Economic Statement (FES)— virtually on December 14, 2021 due to some of her staffers testing positive for COVID-19. Although many in the tax community have been eagerly awaiting several significant measures—including further changes to the intergenerational transfer rules, rules around increased taxation of financial institutions, and immediate expensing of certain capital expenditures for CCPCs—no additional details or draft legislation for these measures were included.
Contents
Economic and Fiscal Update 2021
Download PDF [148 kb]
Download PDF [148 kb] 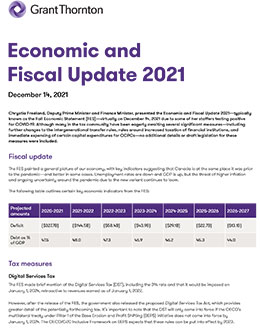 The FES painted a general picture of our economy, with key indicators suggesting that Canada is at the same place it was prior to the pandemic—and better in some cases. Unemployment rates are down and GDP is up, but the threat of higher inflation and ongoing uncertainty around the pandemic due to the new variant continues to loom.

The FES made brief mention of the Digital Services Tax (DST), including the 3% rate and that it would be imposed on January 1, 2024, retroactive to revenues earned as of January 1, 2022.

However, after the release of the FES, the government also released the proposed Digital Services Tax Act, which provides greater detail of the potentially forthcoming tax. It’s important to note that the DST will only come into force if the OECD’s multilateral treaty under Pillar 1 of the Base Erosion and Profit Shifting (BEPS) initiative does not come into force by January 1, 2024. The OECD/G20 Inclusive Framework on BEPS expects that these rules can be put into effect by 2023.

Key characteristics of the DST

The Small Businesses Air Quality Improvement Tax Credit—arguably the most significant new tax measure in the FES—is meant to encourage small businesses to improve air quality at their place of business.

Its key characteristics are:

Under the carbon pollution pricing system (i.e. carbon tax), the federal government returns the proceeds to the provincial governments for provinces that have adopted the federal system. In those provinces where the federal requirements are not met, i.e. Ontario, Alberta, Manitoba and Saskatchewan, known as the “back-stop jurisdictions”, the proceeds from the carbon tax are, for the most part, returned to individuals. In Budget 2021, the government announced it would also return the proceeds from the carbon tax directly to farmers. In the FES, the government has proposed to provide this support via a refundable tax credit and has provided the following additional details.

It’s expected that the following farming businesses would be eligible to receive this refundable tax credit:

In 2016, the Eligible Educator School Supply Tax Credit was introduced as a 15% refundable tax credit to educators who purchased certain qualifying supplies for use in their classroom or regulated childcare facility. The proposed changes in the FES increase the rate of the refundable tax credit, expand the list of qualifying expenditures and allow for the use of the supplies in any location.

The rate of the refundable tax credit will be increased to 25%, which will apply as of the 2021 taxation year.

Furthermore, certain electronic devices would also qualify for the tax credit, including:

The Underused Housing Tax was introduced in Budget 2021, although few details were provided at the time other than it was taxed at 1% of the property value and that it would apply as of January 1, 2022 to vacant or underused residential property owned by non-resident, non-Canadians.

After a consultation process, additional changes are being proposed to this upcoming tax as follows:

Although the FES did not introduce any new programs, the government had recently announced new programs that would provide wage and rent subsidies for businesses in the tourism and hospitality industries and for those that continue to experience a significant decline in revenues, as well as a reduced income support for individuals. The legislation for these new measures and other extensions is still undergoing the Parliamentary process as of the date of this article. The following table provides a summary of the government’s most significant COVID-19-related support programs that are still, or soon-to-be, available:

Carbon Capture Utilization and Storage: an investment tax credit (ITC) for CCUS projects was announced in Budget 2021 for blue hydrogen projects and direct air capture projects, as well as the potential for tax support for green hydrogen producers. Again, nothing new in the FES except that the final design of the ITC will be announced in Budget 2022.

The information contained herein is intended for general informational purposes only and does not constitute as advice or opinions to be relied upon in relation to any particular circumstance. For more information about this topic, please contact your Grant Thornton advisor. If you do not have an advisor, please contact us. We are happy to help.