Overcoming risks to reap the rewards

Entrepreneurs are driven by both passion and profit. The decision to start a business involves a cost-benefit analysis –  while entrepreneurship carries significant risk, the rewards can be great. Having a great idea is not enough. In order to achieve profitable growth – and a sustainable business – entrepreneurs must consider the personal financial implications, in addition to corporate factors such as taxation and government funding, and how they shape entrepreneurship.

What drives an entrepreneur?

As the popular saying goes, “do what you love, and you’ll never work another day in your life.” This also applies to entrepreneurs, as a majority of Canada’s small and medium business owners consistently report that passion is a stronger motivator for them than personal financial gain. This applies regardless of age – millennial entrepreneurs1 and boomer entrepreneurs2 alike have reported3being passionate about what they do.

For most boomers, entrepreneurship is a planned stopover on the road to retirement. Over half reported they have already started or are considering starting a small business before they retire. Of these, most stated that their main motivation was a desire to be their own boss. Meanwhile, Canadian business owners are becoming older,4 with approximately half of all entrepreneurs in the 50 to 64 age range.

Other than motivation, and a desire to turn passion into a career, what makes an entrepreneur? There are certain positive qualities of business owners, which the Business Development Bank of Canada suggests evaluating in an entrepreneurial potential self-assessment.5

If you see possibilities where others see problems if you are not afraid to take on initiatives, and if you are curious and continually in search of discovery, you're off to a good start. 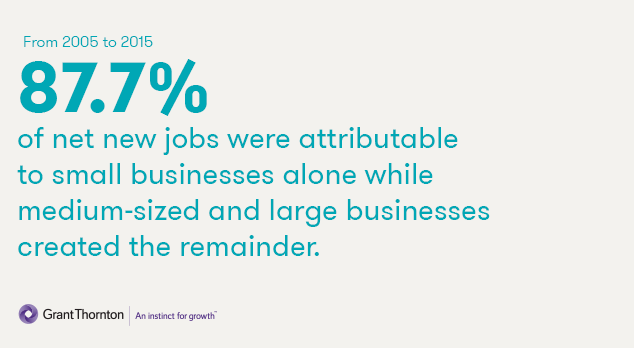 State of play: Canada is an appealing place to start a business, but fewer are choosing to do so

The state of entrepreneurship in Canada is healthy overall and compares favourably to other developed economies, but there are fewer new businesses than before, and most owners of small and medium-sized businesses are getting older.

The entry rate is significant because it means there are fewer new firms entering the Canadian economy, which is a key indicator of economic health. This rate of business “churn” – that is, the sum of business entries and exits – placed Canada eighteen among 20 OECD countries in 2012, and has declined since 2006. Compared with other OECD countries, Canada also has a relatively small share of startups and young firms, and a large share of old firms among its small businesses. In 2014, it ranked9 nineteenth out of 20 OECD countries for the percentage of 0 to 2-year-old businesses as compared to all businesses.

Despite these challenges, small and medium-sized businesses continue to outperform10 the Canadian economy. In fact, these businesses account for nearly all firms in Canada (97.9 percent), and proportionally play a large role in job creation.