On November 3, 2022, the Honourable Chrystia Freeland, Deputy Prime Minister and Minister of Finance, tabled the federal government’s Fall Economic Statement (FES 2022). Minister Freeland’s update comes at a critical time as rising inflation, interest rates, and the cost of living are roiling Canadians’ finances. FES 2022 announced targeted support measures meant to help at-risk Canadians and businesses, and to launch what Minister Freeland called "a real, robust industrial policy" to position Canada for future economic growth. The government also introduced several tax measures to respond to the U.S. Inflation Reduction Act— including the share buyback tax that encourages corporations to reinvest their profits into the workforce and our economy, and investment incentives for clean technology and hydrogen production.

The following table outlines key economic indicators in both scenarios:

The projected deficit for 2022-23 is reduced to $36.4 billion in the baseline scenario or $49.1 billion in the downside scenario, in comparison to a deficit of $52.8 million projected for the same period in Budget 2022 [ 1400 kb ]. The government expects to see a budget surplus by 2027 based on their official projections.

The government proposes a refundable tax credit for investments in certain clean technologies including:

If enacted, this tax credit will be available for eligible investments made on or after the day Budget 2023 is tabled and will be gradually phased out starting with property that becomes available for use in 2032, until it’s fully phased out at the start of 2035.

Investment in the production of clean hydrogen could lead to a tax credit of at least 40 per cent. The government announced the launch of a consultation on how to best implement its previously announced refundable tax credit for investments in clean hydrogen production. In particular, Finance is seeking input on the carbon intensity-based system most appropriate for Canada and the support level required for different production pathways. As with the clean technologies tax credit, this will be tied to satisfying certain wage and apprenticeship labour conditions. Where these conditions are not met, the maximum tax credit will be reduced by 10 per cent. Details on the maximum tax credit are not yet available.

If enacted, the tax credit for clean hydrogen will be available for eligible investments made on or after the day Budget 2023 is tabled and will be phased out after 2030.

Extension of the Residential Property Flipping Rule to Assignment Sales

FES 2022 confirms the government’s intention to proceed with implementing the proposed new residential property flipping rule introduced in Budget 2022 [ 1400 kb ], and announces the extension of the rule to profits arising from assignment sales.

Under the residential property flipping rule, residential properties held by individuals for less than 12 months are considered “flipped property” and any gain on the sale is deemed to be business income and fully taxable with no principal residence exemption available to reduce the tax. An exclusion may be available where the property is disposed of due to a qualifying life event which generally includes: death, an addition to the household, separation, threats to personal safety, disability or illness, loss of employment, an eligible relocation (e.g., a work relocation where the new house is 40 km closer to the new location), insolvency, or involuntary disposition.

By extending this rule to assignment sales, Finance’s intention is that individuals who hold the rights to a pre-construction residential property and sell within 12 months will be subject to the same tax treatment as someone who had owned the property for the same period. The 12-month holding period would reset once ownership of the property transfers to the taxpayer.

The government intends to introduce a 2 per cent tax at the corporate level on share buybacks by public corporations (I.e.,., where the company purchases its own stock back from its shareholders). This is similar to the 1 per cent levy on stock buybacks recently introduced in the U.S. If enacted, this new tax will apply to the net value of all share buybacks by public corporations in Canada and will go into effect on January 1, 2024. More details will be provided in Budget 2023.

The list is extensive, but some key measures include:

Furthermore, Budget 2022 [ 1400 kb ] announced the government's intention to launch a review focused on the challenges posed by the digitalization of money and cryptocurrencies. FES 2022 confirms that consultations on the tax framework for digital currencies are being launched on November 3, 2022.

Have questions? Let’s talk. Contact your local advisor or reach out to us here. 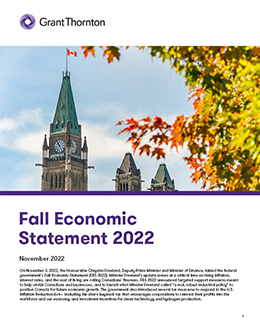 The information contained herein is general in nature and is based on proposals that are subject to change. It is not, and should not be construed as, accounting, legal, or tax advice or an opinion provided by Grant Thornton LLP to the reader. This material may not be applicable to, or suitable for, specific circumstances or needs and may require consideration of other factors not described herein.

Get the latest information in your inbox.

Subscribe to receive relevant and timely information and event invitations.