On March 28, 2018, Finance Minister Charles Sousa tabled Ontario’s 2018-19 budget. As a result of the province’s strong economic performance over the 2017-18 fiscal year, the government has announced through this budget that it has achieved its target of fiscal balance for the year. While previously it was projected that the province’s Liberal government would present balanced budgets over the next two fiscal years, recent policy changes have indicated that the government intends to make large strategic investments in infrastructure and social programs with the goal of creating conditions for a more robust economic expansion.

Notable investments include the expansion of the OHIP+ (free prescription) program so that it applies to people aged 65 and above commencing August 2019, as well as investing $2.2 billion over three years to provide free, licensed child care, beginning in 2020, to children aged 30 months and above.

In acknowledging that the newly projected deficits in 2018-19 and 2019-20 deviate from the government’s previous indications that it would provide balanced budgets in those years, a new fiscal recovery plan has been provided outlining that the province intends to return to fiscal balance in 2024-25.

To address a decline in research & development (R&D) expenditures in recent years, the 2018 provincial budget proposes to expand the application of the ORDTC. This expansion targets large businesses in particular by providing an enhanced 5.5% non-refundable tax credit on eligible R&D expenditures over $1 million in a taxation year. In effect, this provides a 2% enhancement over the existing 3.5% non-refundable tax credit on eligible R&D expenditures and will become effective for relevant expenditures incurred on or after March 28, 2018.

In the case that a business’s taxation year straddles March 28, 2018, the enhanced ORDTC will be pro-rated.

Effective for eligible R&D expenditures incurred on or after March 28, 2018, the 2018 provincial budget has proposed that the OITC be enhanced.

In the case that a company qualifies for the OITC, this enhancement will apply in the following manner depending on the company’s ratio of R&D expenditures to gross revenues:

It is worth noting that the values used in the ratio of R&D expenditures to gross revenues must be attributable to Ontario operations.

In the case that a business’s taxation year straddles March 28, 2018, the enhanced OITC will be pro-rated.

The 2018 provincial budget has announced that the government of Ontario will be reviewing the effectiveness and feasibility of implementing tax incentives such as patent boxes (i.e. preferential CIT rates), refunds of taxes paid, tax deductions and exemptions to develop an incentive plan to assist the province in retaining the economic and social benefits obtained from intellectual property developed within Ontario.

The 2018 provincial budget has proposed that eligibility for the Ontario Interactive Digital Media Tax Credit be extended to include film and television websites purchased or licensed by a broadcaster and embedded in the broadcaster’s website. This amendment would apply specifically to websites hosting eligible content, where the content has not received either a certificate of eligibility or letter of ineligibility prior to November 1, 2017. 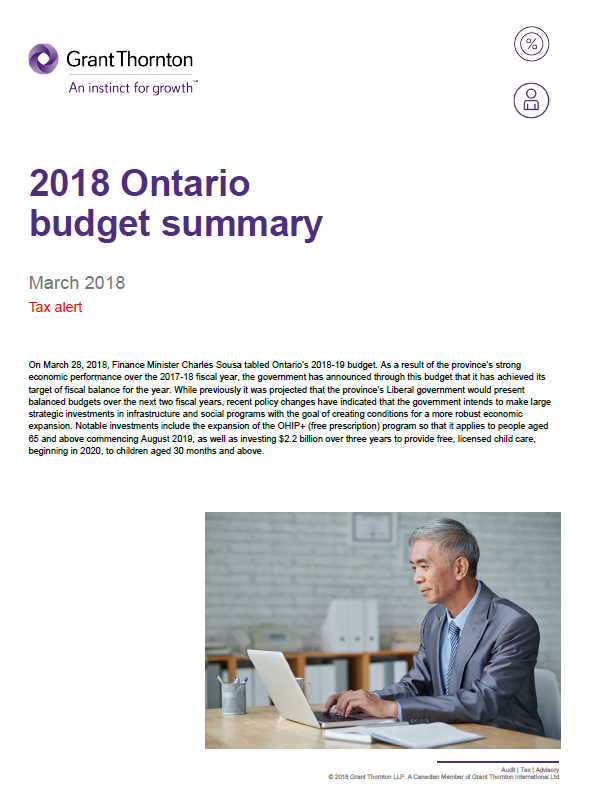