On February 27, 2018, Finance Minister Bill Morneau presented the government’s 2018-2019 federal budget. This tax alert provides a summary of the tax measures proposed in the budget.

As expected, included in this year’s budget is the draft legislation to address the perceived tax advantage enjoyed by business owners when investments are made through their private corporations instead of personally. The government’s concerns around this matter were originally brought forward in the July 18, 2017 consultation paper, Tax Planning Using Private Corporations. Due to significant push-back from the business and tax communities in relation to this specific concept, the government assured affected taxpayers that any legislative response would include grandfathering.

As discussed further below, the Budget 2018 proposals in relation to passive income revolve around a grind of the small business deduction based on associated company investment income and a new refundable tax pool concept. Other specific matters addressed in the July 18, 2017 consultation paper, specifically around income splitting, were previously addressed by way of draft legislation issued in December 2017.

There are no additional changes to the corporate tax rates from those previously announced in the fall economic statement for small business corporations. The budget also did not include any changes to the personal tax rates and tax brackets.
Despite speculation over the last couple of years, the government did not increase the capital gains inclusion rate or provide any specific measures related to the Scientific Research and Experimental Development (SRED) program.

The budget, however, did include measures to combat aggressive international tax avoidance (i.e., the use of so called “tracking arrangements” and the use of transactions involving partnerships and trusts to distribute tax-free distributions to non-resident shareholders). The government also indicated that it will continue to work with its international partners to improve international dispute resolution, and to ensure a coherent and consistent response to fight cross-border tax avoidance. 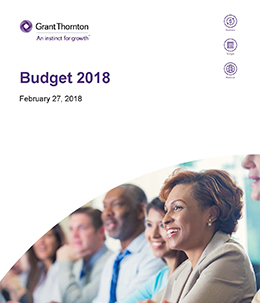