The federal government reiterated its continuing focus to invest in the economy so that it works for the middle class and those working to join it.

As the economy strengthens, the government is adjusting its fiscal strategy to reflect the better-than-expected economic outlook. It now expects steady improvements in its budgetary position and a decline in the federal debt-to-GDP ratio. Deficits are projected to be $19.9 billion in 2017-18, which is lower than the $28.5 billion originally forecasted in the 2017 budget. By 2021-2022, the deficit will decrease to $13.9 billion, which is also lower than the $18.8 billion originally projected. The federal debt-to-GDP ratio is projected to decline gradually over the forecast horizon, and is expected to be 28.5 per cent by 2022–23.

This outlook includes new policy actions taken since Budget 2017 and the tax measures announced in this economic update.

The government focused on four tax measures in this economic update and also tabled a Notice of Ways and Means Motion that proposes legislative changes to index the Canada Child Benefit and lower the small business tax rate. 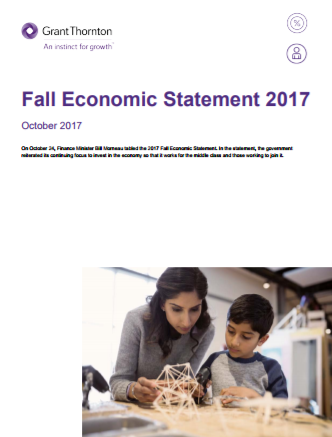