The modern face of slavery is human trafficking.

As the second largest illicit business in the world (after drug trafficking), human trafficking yields an estimated $150 billion in illegal profits each year through criminal enslavement and exploitation of an estimated 21 million people worldwide. It is also among the world’s most underreported crimes.

Though the act of exploiting human beings through forced labour is an ancient practice, human trafficking was only recently established as a criminal act. In 2000, the United Nations adopted the Palermo Protocol, marking the first time this form of modern slavery was defined in an international treaty. Since then, 140 countries have criminalized human trafficking.

The UN defines human trafficking as “the recruitment, transportation, transfer, harbouring or receipt of persons, by means of threat or use of force or other forms of coercion… for the purpose of exploitation. Exploitation shall include, at a minimum, the exploitation of the prostitution of others or other forms of sexual exploitation, forced labour or services, slavery or practices similar to slavery.”

Human trafficking occurs around the corner and around the world—in urban centres, rural areas, developing countries and first world nations. The victims—often women, children and at-risk youth—are lured with false promises of well-paying jobs or manipulated by people they trust. Despite its pervasiveness and the millions believed to be victims, only 418 cases of forced labour were prosecuted globally in 2014. And the toll of inaction is steep: in the sex trafficking trade alone, an estimated 30,000 people die each year from abuse, disease, torture and neglect.

The financial sector can play a role in helping victims of human trafficking and support the role of law enforcement by knowing how to detect suspicious financial activities that are often associated with this nefarious enterprise. 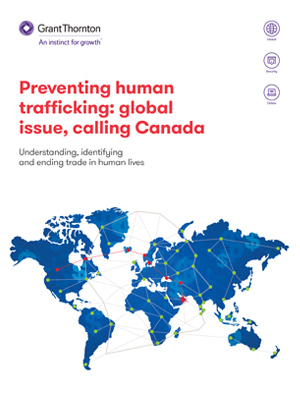