Business combinations are infrequent transactions that are unique for each occurrence. IFRS 3 ‘Business Combinations’ contains the requirements and despite being fairly stable in the ten years since it’s been released, still provides challenges when accounting for these transactions in practice.

Our ‘Insights into IFRS 3’ series summarizes the key areas of the Standard, highlighting aspects that are more difficult to interpret and revisiting the most relevant features that could impact your business.

The acquisition method set out in IFRS 3 is applied from the point of view of the acquirer – the entity that obtains control over an acquiree which meets the definition of a business. An acquirer must therefore be identified whenever there is a business combination. This article explains how to identify the acquirer.

This article should be read closely with our other ‘identification’ articles:

A critical point to note is the acquirer for IFRS 3 purposes (the accounting acquirer) may not always be the legal acquirer (the entity that becomes the legal parent, typically through ownership of majority voting power in the other combining entity).

What is IFRS 3’s approach to identifying the acquirer?

In these more complex situations, IFRS 3 takes an in-substance approach to identifying the acquirer rather than relying solely on the legal form of the transaction. This in-substance approach looks beyond the rights of the combining entities themselves. It also considers the relative rights of the combining entities’ owners before and after the transaction. Combinations where the acquirer of a business is the acquiree rather than the acquirer are reverse acquisitions and IFRS 3 provides specific guidance on how to account for these. Refer to page 6 for more details. This means if, when applying the control guidance in IFRS 10, it is not clear which of the entities being combined is the acquirer, entities should revert back to IFRS 3 which provides the following additional indicators to consider:

Examples involving the creation of a new entity

In practice, one of the most common situations where the process of identifying the acquirer requires a more in-depth analysis is when a new entity is formed to bring about a business combination. This can be done in many ways and sometimes can result in a ‘reverse acquisition’ which is explained on page 6. Below are situations of when a new entity might be formed to bring about a business combination: 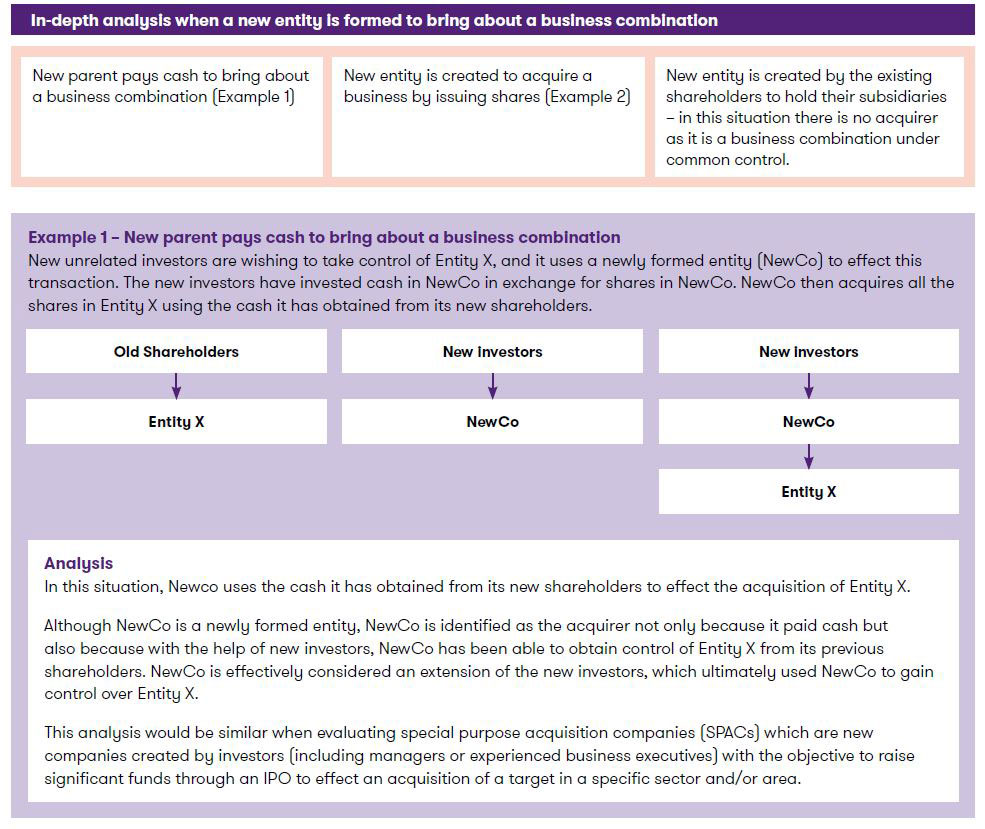 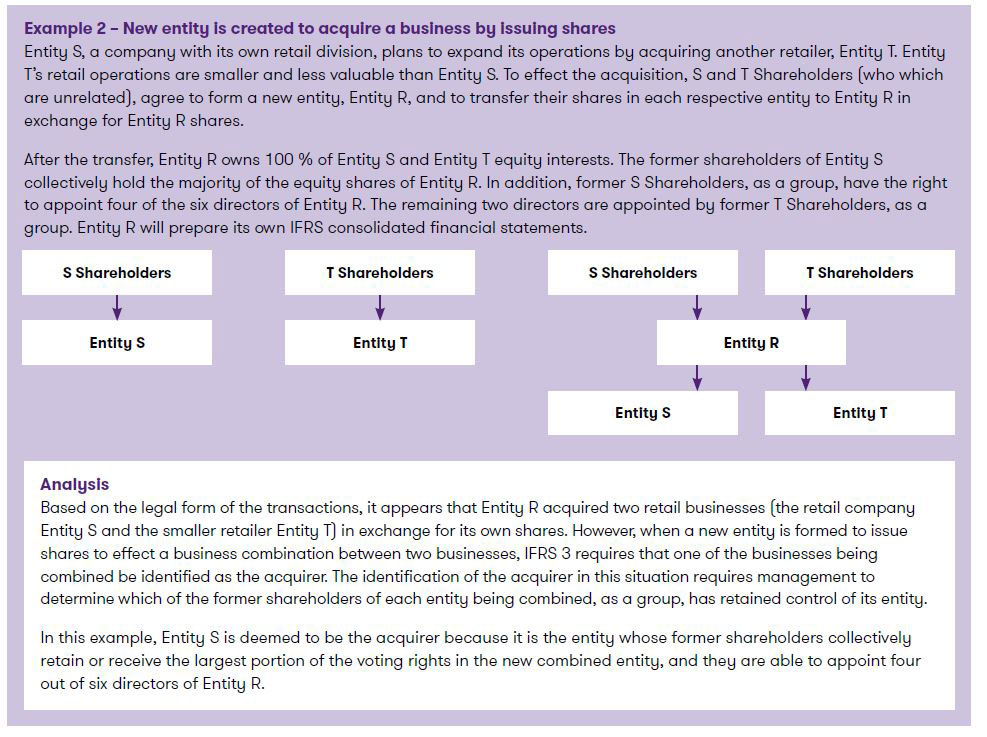 “IFRS 3 initially directs an entity to IFRS 10 ‘Consolidated Financial Statements’ to identify the acquirer, and to consider which entity controls the other (i.e. the acquiree).”

When considering a combination effected primarily by exchanging equity interests, other factors and circumstances shall also be considered such as:

Example 3 – Merger of four companies and their relative voting rights

Four companies decide to group their businesses and to do so, they decided to merge together and form NewCo. This is

to create economies of scale. Each company has agreed to contribute their business to NewCo in exchange for shares in

NewCo. The characteristics of the four companies are as follows:

In this situation, Company A is the acquirer. Usually, the entity whose owners obtain the largest portion of the capital of the combined entity generally also has the ability to elect the majority of the members to the governing body.

Another common situation where the process of identifying the acquirer requires some in-depth analysis is when shares are exchanged, and the result is that the accounting acquirer is not the legal acquirer. Normally it is the entity who issues shares to acquire a business who obtains the control of the business it acquired. It is then identified as the acquirer. However, it could happen that following the issuance of the shares by the entity (legal acquirer), it is instead the legal subsidiary that is identified as the acquirer. These are known as reverse acquisitions.

acquiree is a business, the recognition and measurement principles in IFRS 3 apply, including the requirement to recognize

goodwill. If the accounting acquiree is not a business, then it is outside the scope of IFRS 3. As this topic is a challenging one in practice, we have a published separate guidance on this, including examples, as follows:

When a business combination is achieved by contract alone, such as a stapling arrangement, with no combining entity obtaining control of the other combining entities, the acquirer should usually be the combining entity whose owners (as a group) receive the largest portion of the voting rights in the combined entity. This matter was considered by the IFRIC and an agenda decision confirming this accounting treatment was issued in May 2014.