As announced in the 2021 federal budget plan (Budget 2021), the government proposes to expand the mandatory disclosure rules contained in the Income Tax Act (the Act) to require taxpayers, advisors and promoters (and certain other parties) to disclose relevant information on aggressive tax planning or transactions to the Canada Revenue Agency (the CRA).

On February 4, 2022, the Department of Finance (Finance) released draft legislation for public comment, which include the following changes to the mandatory disclosure rules:

Overall, if the proposals are enacted in their current form, the compliance burden for taxpayers, advisors and promoters is anticipated to be significantly increased.

On August 9, 2022, Finance updated the draft legislation in response to feedback received during the consultation period. One major change is that the application date of the mandatory disclosure rules has been pushed back to 2023 from 2022.

On November 3, 2022, Finance announced that in order to better assess further consultation feedback that it received, it intends to delay the date of application of the proposed reporting requirements for both reportable transactions and notifiable transactions to the date on which the new rules receive Royal Assent (previously, was to be applicable to transactions entered into after 2022). The application date for uncertain tax treatments was left unchanged.

On February 4, 2022, the Department of Finance released draft legislation for public comment, which included changes to the mandatory disclosure rules. 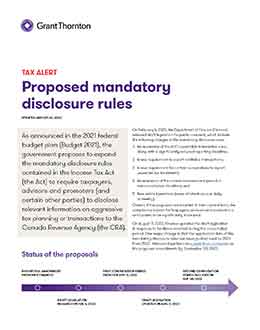